Most interfaces for FIBS provide a players list, which is supposed to display all players presently online. Unfortunately, very often not all players are displayed in this list.
I will explain why this happens, provide an idea how to solve this problem and present an implemenation herefore for the most comfortable FIBS interface - JavaFIBS2001 1) . If you are not interested in the background, you can jump directly to the solution.
When logging in, JavaFIBS2001 is building up a players list. This is done using the command "who". FIBS is answering by reporting all players presently online, including a set of information for each player, i.e.: How many players are online is shown at the right top of the players list:

Unfortunately this list very often is incomplete. Why?
Well, the amount of information FIBS is providing after the who-command is given is relatively big. But FIBS stops answering after a specified time. This secified time is not sufficient for FIBS to provide the whole players list. As there is no major maintenance of the FIBS software any more, this problem will continue to exist in the future.
With some tricks you can "tickle" the information out of FIBS.
The order of FIBS's answers to the who-command can be set via the FIBS-variable "sortwho", which can have the following values: If the variable is set to "rating", the players are reported in the order of their rating, if it's "rrating" in the reverse order of their rating, etc.
This FIBS-variable is set for each FIBSter individually. Everyone can change it's value by the command "set" as follows:
set variable new_value
For the variable sortwho the command can be "set sortwho rating", "set sortwho name", etc., to be entered in the command-line of JavaFIBS2001 (bottom left):

The approach for a solution now is, to send a couple of who-commands to FIBS, while changing the value of the variable "sortwho". Though FIBS will in all cases not report the complete players list, by changing the order of it's answers it is ensured, that every player online is at least reported once and will therefore be inserted in the players list.
You do this by giving the following commands: Usually the players list is complet now, but to be sure, I add - after waiting again - the following commands: Now we have a complete players list!
Well, but it's not really comfortable to type those six commands manually each time you log in. I recommend to use the "Programmable Buttons" of JavaFIBS2001 as described below.
I have installed six "Programmable Buttons" for my JavaFIBS2001:

Those buttons are defined as follows: After having logged in, you just have to If you watch the number of players online while doing this ....

... you will see the number increase. At the end the players list is complete!
You can implement the buttons in three different ways:
Method 1: Download the buttons-configuration file
I recommend this way, if you don't use any other "Programmable Buttons". Otherwise use method 2 or 3 please.
1. If JavaFIBS2001 is running: Shut down JavaFIBS2001 2) .

2. Download the buttons-configuration file here. (Attention: Please use your right mouse button and select "Save target as ...". Otherwise the browser will open the file.)

2. Open the file "buttons" with an editor of your choice.

4. Save the file. (The file must keep it's name. Some editors tend to give it the ending .txt. The file name must be "buttons", not "buttons.txt".)
With the example above, the six buttons will look like the predifined button-graphics say1.gif, say2.gif, etc. 4)  If you want it more personal, you can select other pictures of create pictures of your own, of course.
Method 3: Define the "Programmable Buttons" directly by the means of JavaFIBS2001
You can also define the "Programmable Buttons" directly in JavaFIBS2001:
1. Start JavaFIBS2001.
2. Menu "Preferences" 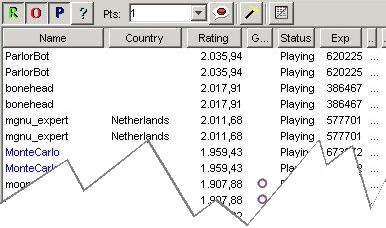 The only solution is, to refresh the players list, using the "update table" button:

Using this button, the players list is build up again, using the who-command. After this action, there are no players twice in the list, but - again - the players list is incomplete. You than have to use buttons 1 to 6 again to get the complete players list. As this JavaFIBS2001-bug appears relatively rarely, you should now have a complete and correct players list.
1. JavaFIBS2001, programmed by Peter Nevalainen, is shareware. The JavaFIBS2001 website can be found at http://www.fibs.com/~cthulhu/

4. JavaFIBS2001 already comes with a set of predifined graphics for buttons. Those are found in the directory /images/. In case of the example introduced in footnote 3, the directory will be D:/JavaFIBS2001/images/.